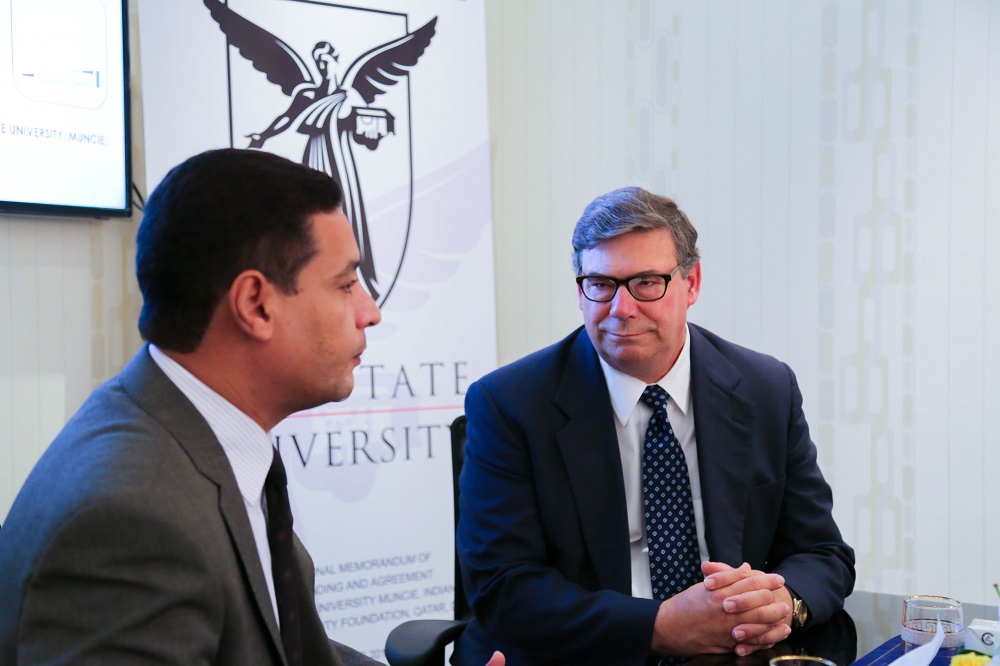 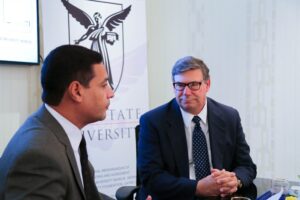 In a meeting that took place between Ball State University in the United States of America and represented by Professor Kenneth Holland – Director of the Center for International Development, and from the other side in the meeting, HE Dr. Mahmoud Al-Samman (Executive Director of the International Program – and the owner of the idea of ​​the program and the designer of the international training guide “SHARIK and be influential” The meeting began with acquaintance and then An explanation of the program, the objectives and the method of work of the guide, and in the meeting Professor Kenneth Holland expressed the importance of this program for its impact on youth in the Arab world, and he spoke and said:

“The SHARIK program is an interesting program that seeks to empower young men and women in entrepreneurship and community participation in 7 countries.” We welcome cooperation together to implement the program.

In the same context, the Sharek program and the training guide “SHARIK and Be Influential” received several other recommendations, the most important of which is a recommendation issued by the envoy of the Secretary-General of the League of Arab States for Humanitarian Relief Affairs through a meeting and also in the international conference of the SHARIK program, which spoke a text and said:

SHARIK program expresses a noble message ,,,, a message of peace and harmony to all countries of the Arab and international world and supports and activates the potential and capabilities of young people, and enables them to implement community initiatives, entrepreneurship and economic projects to achieve a higher goal, which is integrating all youth and people with disabilities into their society and stimulating the spirit of Belonging to them.

Since today, I have placed on my shoulders the responsibility and, after the success of the program, I invite from this platform young people in our Arab world to participate in this international program….

With more confidence, and for a better and bigger bid.

The “SHARIK for a Better Life” program is one of the most important international programs at Ensan Aid Foundation, which seeks to support societal and economic participation and entrepreneurship for young people in the Arab world. The program was implemented

In 4 countries: Lebanon, Jordan, Egypt and the Gulf states

The program aims to empower young people with life skills to implement economic projects, entrepreneurship and community initiatives. The program is based in its work on the international directory “Participate and Be Influential” designed by Dr. Mahmoud Al-Samman. The program was implemented in several countries: Lebanon, Egypt, Jordan and the Gulf states.

The guide includes 7 life skills, including

The guide works in an unconventional way that provides greater opportunities for youth to participate and allows young people to show their energies. It is not theoretical, but it is implemented by young people in the field